A language can act as a channel of communication and at the same time act as a barrier in an unfamiliar environment. Knowing and understanding the native language of a place where you work or travel is a trait that removes this barrier in communication.

Now a days, students show a keen interest in studying foreign languages and pursue it as a career option. A multilingual person can be open to various career opportunities such as a translator, interpreter, linguist, professor and much more.

Apart from adding great value to a student’s CV, it makes them socially more approachable as well as accessible. These are the exact qualities a recruiter expects from the future employees. The students who know another language get an edge from other candidates. The pay offered to these students is also high as compared to others.

In India, due to the globalization of the MNCs, job opportunities are also increasing. Some of these include working as an interpreter, translator and embassy or UNO representatives. While there is a minor scope in the fields of tourism and entertainment. In order to carry on with these jobs, one needs to ensure that his or her skills are worth appreciation.

In order to meet this demand, several reputed institutions offer degrees in foreign language. One of the most popular course for the same include a Bachelors of Arts degree in Foreign Languages. Before this, one needs to identify the top languages that are in demand so that they can be updated with time. The top languages which are preferred in India are Spanish, French, German, Korean, Russian, Portuguese and Japanese.

The list of such reputed colleges is quite long. We have picked some of the best institutions for you to choose from. You should consider the following institutes for getting a B.A.:

This university is located in Chennai. Loyola College is an institution which is extremely enriched when it comes to historical importance. Being founded in 1925, this university’s major aim is to provide its students with a proper educational background. To meet its vision, Loyola College provides B.A course in the foreign language.

This institution offers B.A in the French Language along with the Bachelor’s degree in other oriental languages. No doubt the course which is being provided by this university is versatile in its every aspect. The examinations as well as the training being conducted in the proper format ensure the enhancement of the fundamental knowledge. According to the placement records, the past years saw an exponential increase in the number of companies visiting and the number of students getting recruited.

This college is situated in the lush greenery of Dehradun. This institution provides certification course in foreign languages such as German, Spanish as well as French. With such enlightening curriculum, this institution believes in excelling which is a reason why it has grand recruiting partners. It is a trend that the students pursuing foreign language courses get extremely good opportunities.

As we all know, Manipal University is versatile from each and every aspect. To continue, this institution provides B.A in Foreign Language and Intercultural Studies. It is a three-year program with eligibility demanding 50% aggregate marks.

Through this course, the students not only learn a major language such as German or French but they are also provided with the opportunity to learn a second foreign language in the course. 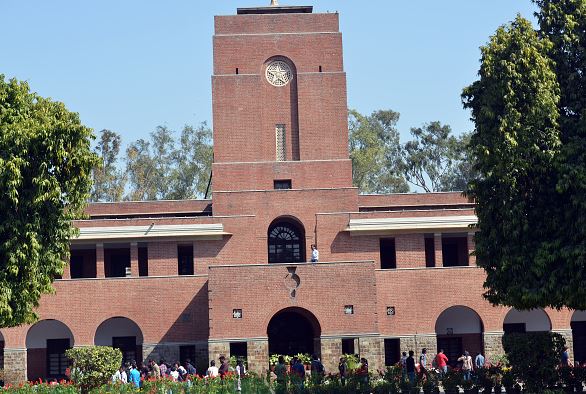 As we know, Delhi University has a cluster of colleges attached to it. The aspiring students can apply for the Germanic and Romance Studies which offers a bunch of courses such as B.A in Italian, German, French, Spanish and other courses such as Postgraduate courses in foreign languages. Colleges such as St. Stephen’s College, Khalsa College, Ramjas College and much more are the best ones to offer B.A in foreign languages. The progress has reached such a level where the administrators have planned to include a special course of interpretation which may appear in the final year.

Savitribai Phule University was founded as early as 1949 and since then it has witnessed the recurring changes in the education pattern. This university in Pune offers a number of foreign language courses in its curriculum. The major course which is provided includes M.A in Foreign languages, apart from this, there are a large number of Diploma as well as Advanced Diploma courses for languages such as Russian, German, French, Japanese etc.

The main objective behind their operations is to ensure that the students pursuing this particular course are able to taste the sweetness of the language and absorb its beauty in each and every aspect. The unique initiatives undertaken by this university proves the intent to make their students extremely strong with respect to the talent of being multilingual.

Symbiosis is an extremely popular academic institution which is situated in Pune. Apart from other famous courses, Symbiosis also includes a special wing which is termed as Symbiosis Institute of Foreign and Indian Languages.

This institution focuses on providing B.A in languages such as German as well as French. The basic eligibility criteria are extremely simple which allows the aspirants to pursue their dream of studying different foreign languages.

Apart from these institutions, there are a number of institutes which aim to provide good quality courses such as B.A in Foreign Languages. It is a well-known fact that each and every day, new opportunities are being formed in this field.

The person may grab interesting jobs in embassies, UN bodies and other Multinational Companies as interpreters and translators. Apart from this, organizations such as Alliance, Max Mueller Bhavan are nowadays aiming to recruit professionals who have specializations in foreign languages, this is because there is a special importance for technical translation in their businesses.

The salary which one can receive after the completion of B.A in foreign languages is variable. Depending upon the type of job one is continuing with, his or her salary is subjected to increase. An interpreter may expect a minimal amount of 20,000 during his or her initial work period but as the demand increases, the pay-scale is also incremented.

Foreign language freelancing is an extremely demanded domain in which professionals are required who can have high proficiency over a particular foreign language, thus he or she can earn a large sum of money through these means.

This particular course is interesting and unique compared to the usual basic curriculum. It is recommended that one should opt for B.A in Foreign language but he or she should ensure that the university is providing a strong curriculum to enhance the knowledge. 🙂